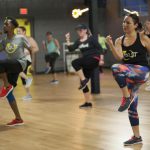 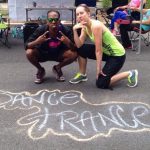 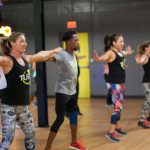 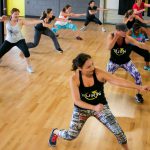 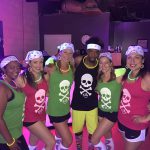 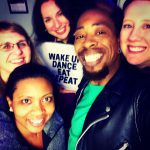 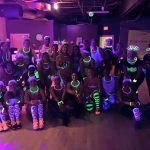 Dance Trance Richmond is now located at Turn Cardio Jam Studio, in Richmond’s Scott’s Addition neighborhood. With an amazing sound system, superior padded, free-floating fitness floor, and 2,100 feet to dance —  It’s the only place in the RVA where your workout feels like a night out! It’s where we throw down a Dance Trance playlist jam packed with choreographed routines to the hottest hip-hip, pop, rock and alternative music on and off the radio!

Dance Trance RVA churns out heart pumping classes to hot choreography nearly everyday of the week. If you love to dance but have grown tired of the same ol’ same ol’ — this is where you want to be! Not only will you work up a sweat and get a great workout but you’re sure to feel like a backup singer/dancer ready to go on tour by the time we’re through with you!

DT RVA is one of the first expansions of the Global Dance Trance License Program. Director Sandi Cauley danced with DT founders Jay and Beth Handline in Birmingham, Alabama and Jacksonville, Florida before launching Dance Trance Sarasota and then Dance Trance Richmond. It means you’re sure to see some of your old DT classic routines rotated in with the hot, current radio jams!

Sandi Cauley, Director/Owner Sandi grew up in South Texas and danced Ballet Folklorico (Mexican folk dancing) as a child. But after years of lessons, ornate costumes and recitals gave it up to join the neighborhood girls who were playing soccer. Her love of music and choreography however continued through another outlet – marching band, where she played snare drum in both high school and college. After college, Sandi’s career in television news moved her to Virginia Beach, Birmingham, Sarasota and ultimately Richmond. During her travels – Sandi tore her ACL playing soccer and searched for another way to work out and that brought her to Dance Trance.

She first started as a student in DT Birmingham meeting Jay and Beth Handline in 1998. When the Handlines moved to Florida, Sandi soon followed and licensed the Sarasota studio in 2001 with frequent visits to Jacksonville to work with the Handlines. Sandi later returned to Virginia and opened the Richmond location at Gold’s Gym and then moved it to Rigby’s Jig. Now you can find her instructing class and contributing choreography to the DT Nation. “Dance Trance is truly woven into my life. I’ve danced to de-stress from work. I’ve danced to keep fit before, during, and after all three of my pregnancies. I’ve danced to let my inner B-Boy out but what’s more fantastic is getting to do it with some of the best people I know and love.”

Becca Washburn Becca has been dancing since the age of eleven. She studied in her hometown of South Hill, VA under the Royal Academy of Dancing syllabus of training at Southside School of Ballet. In college at Radford University, she took ballet, modern and jazz classes each semester as a ‘stress reliever.’ After college she moved to Richmond and looked for a place to meet new people and stay in shape. In 2005 she joined Gold’s Gym and worked out on the machines for two days until she saw there was a dance class called Dance Trance. “After my first DT class I knew this was for me. I didn’t know what I was doing but I loved the music and had to keep coming back. I became an instructor in April 2007. Dance Trance for me is not just dance, not just a workout, it is so much more. This is the place I can come after work and let it all go. I have made so many wonderful friends and the DT family will always stay close in my heart.”

Holly Saunders  Holly started dancing at age 3 at Fredericksburg Ballet Center with an emphasis and a love for ballet and jazz. At age 15, she decided to continue with her jazz studies on the side, but hung up the pointe shoes for good. Her true passion turned to the competitive sports arena with soccer, tennis, and cheerleading, however; after college, she knew something was missing from her life….Dancing! Holly found Dance Trance by accident after joining Gold’s Gym to get back in shape. “It is now a part of my life that I could never live without. I am in the best shape of my life, I get to do what I love 4 times a week, and I have made life-long friends in this program.” Holly was asked to be an instructor for DT Fitness in October of 2006, and with that, she can only hope that others will see the passion she has for dance, and that they will be as equally inspired by what this program has to offer. “Dance Trance is, by far, the best dance program I have ever been a part of.”

Cortney Carroll Cortney started dancing when she was four years old and never stopped. She earned a Bachelor of Fine Arts in Dance from Wright State University specializing in ballet, modern, tap, jazz, and musical theater. Cortney went on to dance professionally with various theaters, dance troupes, and even a minor league baseball team. Cortney is a wife and mom of two and is currently teaching Creative Movement to preschoolers at West Hampton Day Academy and Promises Preschool.  Cortney only recently relocated to Virginia from Ohio and says she began searching for a dance aerobics class immediately, “I was looking for a class that was fun, a great workout, and challenging and yet with Dance Trance I found so much more!!!!!  I was hooked after my first class!”

Clinton Spell II Clinton has been obsessed with all things music related since birth. He began dancing as a toddler, and soon after began writing, composing, and recording his own music. While never formally trained, his passion for dance lead him to perform in numerous talent shows as a child. He later combined his love for music and dance in high school, becoming captain (and later choreographer) for two of Manchester High School’s national competing show choirs, and being cast in several of their Drama department’s musicals. Later, Clinton decided to attend Full Sail University in Florida, where he received an Associate’s degree in Recording Engineering. After returning home to RVA and landing a job as manager at a local recording studio, Clinton became bored with his regular exercise routine, and longed to find a dance class that allowed for a good workout, while not being stiff and uptight. He received a coupon for Dance Trance, decided to give it a shot, and the rest is history. He’s been addicted to DT ever since, and now instructs classes, as well as helping choreograph new routines.  “I feel really lucky to have found such a great group of people in Dance Trance, and I’m so thankful for Sandi bringing the DT Nation to RVA and allowing me to join her amazing team.”

Deverly Hargress Deverly first started dancing when she was enrolled in ballet at age four, but admits, it didn’t keep her attention. Her parents instead tried African dance classes and that did the trick. Deverly stayed with it for the next six years but her love of dancing continued to grow. Deverly found Dance Trance Richmond in 2009, when she joined Gold’s Gym to lose the weight she had gained from traveling for work. Without knowing what she was getting into, Dev randomly decided to try Dance Trance Breakdown (DT 101) figuring it was a basic aerobic/jazz class but soon learned she was wrong. Dev says, “I thought I was in some type of Lakers-girls-tryout class. It was challenging and fun at the same time and I was hooked and determined to memorize as much as I could to catch up with the rest of the ladies.” Deverly became an instructor soon after and says she loves it. “It’s a great workout and it’s a physical and mental exercise every time. Good escape from some of the stresses of life. Truly, my favorite part is seeing people who were once strangers, become friends just because of one common factor, which is dance.”