Waiting on “Hold It Against Me” Video 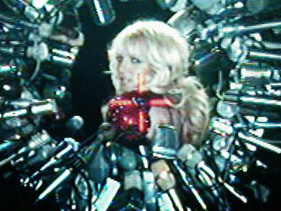 The countdown to Britney Spears’ “Hold It Against Me” video continues.

On Saturday (February 5), just a day after the pop megastar released a five-second clip of the forthcoming visual to her synthy dance hit, Spears tweeted another seconds-long teaser marking 12 days until fans can check out the entire video.

The latest clip is packed with more color than her first teaser, with the title “Hold It Against Me” lit up in neon yellow, green and pink hues. The wreath of microphones fans caught of glimpse of a few weeks ago when Spears tweeted a picture from the set is back, and this time instead of seductively gazing over her shoulder through the mics, the pop diva looks straight ahead as a crew member slams a clapperboard in front of her face. The superstar stares directly into the camera as she sports a sparkly red top, bling-laden choker and dark eyeliner with platinum blonde curls framing her face.

“If I said you have to wait 12 more days, would you hold it against me?” Spears wrote when she tweeted the video. The pop starlet has promised a daily sneak peak at the highly anticipated clip until the entire visual drops in two weeks.

Britney may be rationing out brief looks of the lead video from her Femme Fatale album, but the project’s director Jonas Åkerlund said the multiplatinum songstress didn’t hold back when it came to turning out a show-stopping performance on set.

“[Britney’s] been great throughout the entire process. At the end of the shoot I got the warmest hug I ever got from an artist, and I look forward to hugging her again very soon!” Åkerlund said statement recently. He added, “I’ve been around long enough to know when an artist gives it their all, and to me it doesn’t get better than this. This video is gonna be f—ing awesome. It’s all Britney.”

I started Dance Trance five months ago when it became available at the YMCA branch I work out at regularly.

And well.....I fell in love with it! I love it becuase it's a great aerobic workout as well as a good mind workout (gotta learn all those steps). The music pumps you up and an hour goes by in what seems like 5 minutes.

I joined Gold's Gym to lose the post-pregnancy weight I was still carrying around 6 months after my daughter's birth. Using cardio equipment and weights has always been a chore for me, so I immediately turned to the class schedule to see what alternatives there were. As a long time dancer, Dance Trance appealed to me -- I could do something I loved AND regain my pre-baby body! I went into my first class not knowing what to expect, maybe a series repetitive movements, a few turns and a grapevine thrown in here and there for good measure. What I got was a fun, high-energy, challenging dance fitness class with a wide variety of music and dance styles....it was exactly what I needed! I've never experienced anything quite like Dance Trance! I love the format - 15 songs in one hour. I love the choreography and the music. But beyond all of that, what keeps me coming back, is how much fun each class is! The energy is high, the music is pumping, everyone's having such a great time!